(Warning, Doki Doki Literature Club contains both depictions of and references to  suicide, self harm, and other graphic content)

I can’t fully tell you about Doki Doki Literature Club. If you are familiar with dating sim visual novels, then you expect certain tropes due to the game’s promotional materials: Hapless person falls into a situation in-which several girls surround them, plot progresses and through actions and choices you end up on the route to dating one. I knew this formula going into Doki Doki Literature Club (DDLC for short.) I was also made aware by both the community that has grown around it and even warnings from the game’s creators, that it would eventually stray away from traditional visual novel themes. 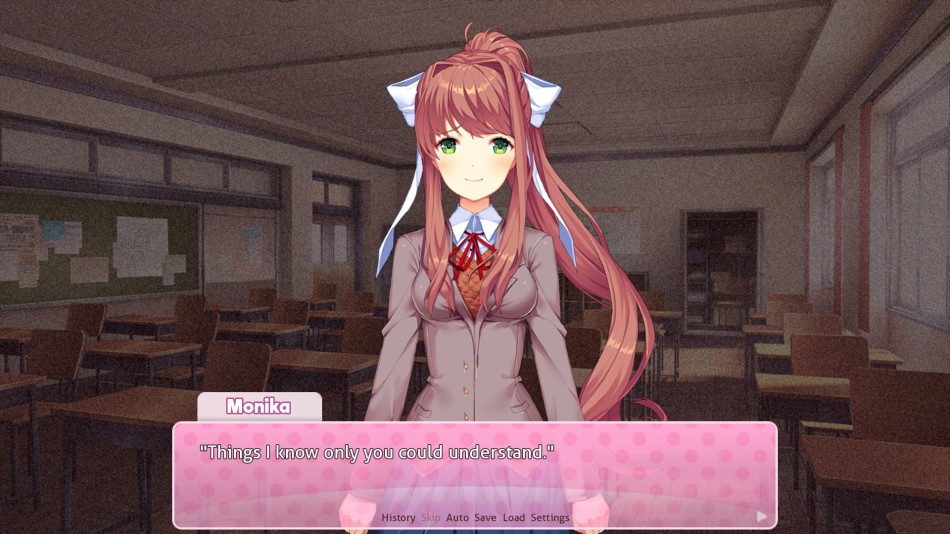 Like all VNs the game started with me being greeted by cheerful noises and entering my name. The journey and set up was familiar as my character encountered his cheerful neighbor/childhood friend, Sayori. Shenanigans erupted and I was dragged into joining the school’s newly formed literature club. Writing poems alongside the girls, exchanging pleasantries and fun banter, the game played well with the tropes of the genre, and when I picked my girl I started to slightly forget the warnings and what I can only call “danger” of the game.

It played with my assumptions, it goaded my responses, and I loved every second of it.

Now, normally I would go into further plot descriptions and over all design. This time, I can’t. I can’t say a single thing about this games plot further than what I have already said. It’s embracing narrative is just too unique. It ruins the journey if I even dare say anymore. I can’t discuss its warping (and to use a phrase a character used) free-form design. It somehow managed to turn one of the most adorable games I have ever heard of into a dark and twisted thing that caused me slight unease whenever it slip into my gameplay. Gameplay which is made up of choices and dialog, as well a poetry mini game played between club meet-ups, to help earn the girl’s favor. The images of the girls as well as the poetry mini game was effected as the very game itself began to unravel in certain ways.

I can say that if you are a fan of horror games, that if you enjoy some of the darker visual novel, that if you are ready to curl up and cry yourself calm after you turn off every electronic device in your home, play Doki Doki Literature Club. I enjoy a lot of horror based media and this is the first time in a long time I felt true suspense playing a game. People usually note games like Silent Hill or the growing catalog of walking horror puzzles like Layers Of Fear as being titans of surreal horror games, but there is something to be said about making someone nervous or fearful of a happy-go-lucky environment. Making sunshine and bright smiles fill a player with dread. Most games that try this type of horror come off too uniformed in staples of the genre. Doki Doki Literature Club pulled off quite a few tricks I have never seen before, used player expectations to their advantage, and managed to utilize a familiar setup up to create something spectacularly new. It makes me excited for what ever this indie studio makes next.

Doki Doki Literature Club is available free for PC and Mac from Team Salvato directly or through Steam. You can support the talented crew that made this by donating during your download, purchasing the Doki Doki Literature Club fan pack or visiting their online shop (which at the time of writing is still being set up). You want to make sure you are following them on Twitter and subscribing to them on YouTube to get updates. For those wanting a more in-depth analysis of themes in the game, stay tuned! It is coming as soon as I calm my nerves and I regain the courage to use my computer fully again.