Two writers for the beloved Disney cartoon Gargoyles made another show in which four mummies are tasked with guarding the resurrected spirit of a murdered young pharaoh in the mid 90’s. Transforming in a Power Ranger-esque manner, these mummies thwart attempts on the pharaoh’s life committed by the spirits original murderer, an evil wizard named Scarab.

Yes this was a show and for its one season run it was amazing.

Mummies Alive was a product of its time. It followed the usual cartoon set up: a team of _____ that fought as _____ against a ________. In this case though it was a team of ancient mummies that fought as supped, motorcycle and jet flying Mummies against a giant bug wizard.

Yeah it was weird…

They protected a 12 year old boy named Presley. The show would follow Presley attempting to just go about his life to the best of his little ability. Learning about his past life from the four mummies that guarded and taught him in his previous life Ja-Kal, Rath, Armon, and Nefer-Tina secretly lived in the museum his mother worked in. Scarab would send a threat or attempt to trick the mummies so that he could finally attack Presley but of course, the Mummies win. Someone might learn a lesson but we all watched just to sorta see the amazing gadgets the Mummies used. We even watched it for being one of the coolest openings that’s ever been in the media of television.

So, with this wacky formula you may be asking what happened? Well, depending on the source you check, this show barely lasted a full run with some sources saying its entire run was only roughly 3 months long. While I look back on the show fondly as a constant, being aired on my local channels right before school started, its original outing wasn’t so loved by others. Low ratings and comparisons between it and Gargoyles had its planned second season cancelled. 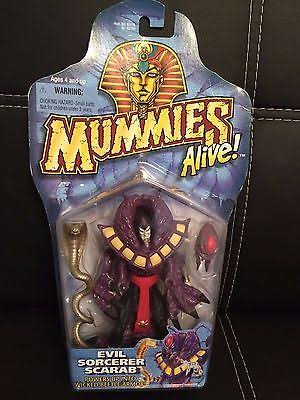 But of course toys were made first…

Despite its end though I will say this: watch it. Yes with this type of set up expect clumsy villains and awkward story conclusions.

It will be a 90’s flashback in the coolest way; where teams fit a strict set up and mummies could use ancient magic and modern day knowledge to make a a flying motorcycle. So gather your friends and ready up the nostalgia and laughs.

Enjoy this series so you can always remember it.

0 comments on “Do You Remember? “Mummies Alive!””