The past few years hasn’t been kind to the profession and art form of being a clown according to World Clown Association president Pam Moody when speaking with the Hollywood Reporter. We had those creepy evil clown sightings last year where people bought masks and hung near schools and parks, but a additional hit has come in the form of the latest film adaption of Stephen Kings It. 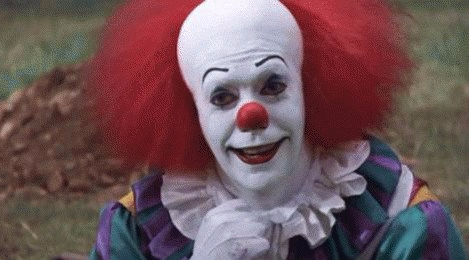 The images of Tim Curry’s Pennywise the clown is ionic, and the new Pennywise played by Peter Skarsgard, promises to terrify a whole new generation. The effects of all the evil and demonic clown imagery is causing quite a bit of coulrophobia amongst the populace and authorities, with one story of a clown in her car preparing for a nearby show having several police officers called to investigate her.

When discussing the way they plan for clowns to handle It, Moody had this to say to the Hollywood Reporter.

“Last year we were really blindsided. We’ve since created a press kit to prepare clowns for the movie coming out.”

So here is hoping that the art of clowns can survive another blow from the horror genre and horror enthusiasts.

0 comments on “‘It’ Causing Real Clowns To Lose Work”