Square Enix has upset some international fans as well as consumer rights advocates, after raising the subscription fee for their mmorpg Final Fnatsay 14, in countries like Russia and Brazil to better match the $15 a month rate that most countries pay.

The Russian price now standing at 890 rubles and in Brazil it went from 29 to 42 real, that increase while converting to $15 dollars in the US, actually equals to spending roughly 30 to 40 dollars, when adjusted. Consumer advocates are reminding the public that while the idea that the game having a standard price in all regions might seem fair,  the average monthly income in Russia and Brazil does not match the states. it is a common practice that game releases in those countries see a reduce cost to match the local income.

Fans are not taking the increase well as the steam page reviews are dropping, and written reviews accuse Square Enix of not being considerate of the market. 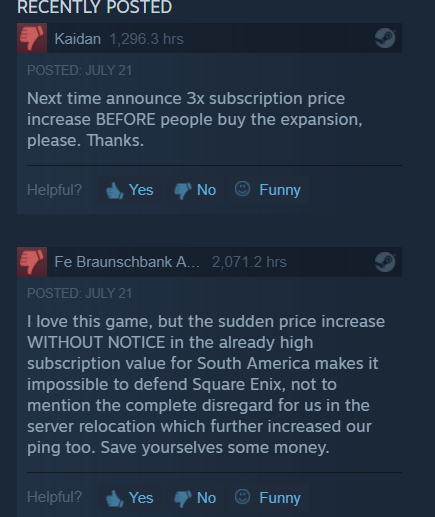 Square Enix has reported that this as a effort to maintain a normalcy of cost across the board. Many fans claim they will be quitting the game. No indication if this might change policy, as seen when GTA V publisher Take 2 Interactive was met with fierce fan backlash and negative reviews following a ban of mods. A decision reversed when the opinion and stance of fans were made clear.