I came in late on the shocker of the big Captain America reveal last week, and unfortunately had to find out via trending topics on Facebook. Of course nothing on the internet can be kept secret any more, but I still would have really loved to see the surprise during my own reading of the book. Once I found out though, I thought it sounded pretty interesting, so I figured I’d still check out the book regardless, just to see what lead up to the event.

The story opens with some monochrome scenes of a drunken man verbally abusing his wife on the street in front of their young son. After slapping his wife, whom we learn’s name is Joseph gets taken down by a mysterious woman in a hat with a red band on it, and wearing a red fur scarf, named Elisa Sinclair. She’s clearly a mysterious and out of place figure, being the only person in the scene that has a primary color on them. Joseph immediately runs away, and Sinclair offers aid the wife, whom we learn is named Sarah.

We then cut to Steve Rogers in his new Captain America uniform, bursting into the scene on a hijacked train. While kicking ass in the name of freedom, he goes into some monologue of some kid who grew up with a rough background, whom recently joined a new sect of the revived Hydra, after listening to a speech by Donald Tru– I mean, The Red Skull.  Cut to present, and we see Steve meeting with the guy, sitting in the conductors seat with a bomb strapped to himself, trying to talk him out of the decision. Of course things don’t go well, and the dude blows himself up, Steve narrowly escaping using his new shield to take the force of the blast.

Later, after seeing some downtime between Steve, and the still aged Sharon Carter, we cut back to Monochrome, with Sinclaire and Sarah Rogers at dinner. Sinclaire mentions that she knows what it’s like dealing with an abusive husband, but that’s he’s passed on. Suspicious. Then we find out the boy’s name is Steven, ultimately solidifying that this is supposed to be a scene from Steve’s past. Interesting.

Cut back to some downtime with Cap’s team, and then we’re off to a meeting between Sharon and Maria Hill. Turns out Sharon is expected to become the new head of S.H.I.E.L.D. after the whole Pleasant Hill incident. They argue a bit, but once Steve arrives, Hill reveals that they have information on Barron Zemo’s location, who had escaped with a scientist after the whole incident, and is now attempting revive his own group of Hydra, although things don’t seem to be going too well for him. Cap and company ambush them, Zemo tries to escape, but Cap intervenes, but is then tricked and finds himself hanging on for his life out of a jet.

Cut in and out of the past, where we find out that Sinclaire is actually a Hydra agent, and hands Steve’s mother a flyer, inviting her to a meeting at their New York branch. That’s when Steve betrays his ally Jack Flag, by throwing him off the jet after coming to his rescue, and we get this panel. 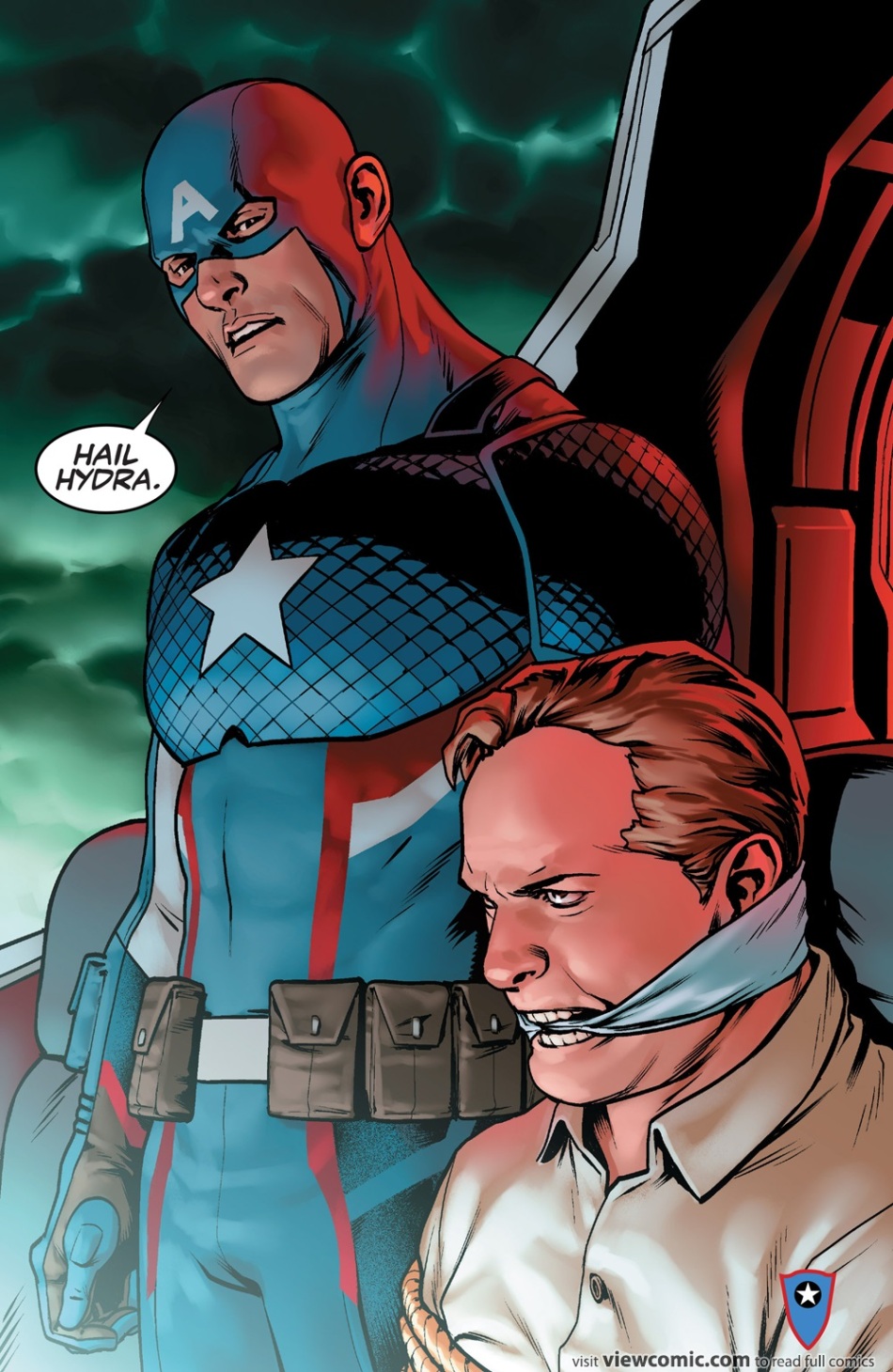 So what does this all mean? “Captain America has been a Hydra agent this whole time? NO! It can’t be! Say it ain’t so!” Alright guys, seriously. How could you ever believe this? It’s funny how people are constantly pointing out all the things Cap stood up and fought for, yet they’re immediately willing to believe the guy’s actually been a part of Hydra this entire time. Seriously!? Guys, really? The comments calling this very poorly written publicity stunt, the idea that Marvel is currently run by Nazi’s, and the death threats sent to the writer Nick Spencer? Is this who we are.

I mean, come on now. First off, this is the Marvel universe we’re talking about here. You know the place where every third mutant born is a telepath, shapeshifting aliens called Skrull’s once lived amongst humans as normal citizens, heroes and villains hop through dimensions all willy nilly, Axis was a thing, and we just came off an event where the cosmic cube took the form of a child, who temporarily lost control of her powers after having an emotional spat. We never even learned exactly how Steve suddenly became young again. No one ever thought that whatever magically altered his age, might have also messed around with his past? This is also just the first issue in a new storyline. Absolutely nothing. Nothing has been confirmed as of yet.

I just don’t think people are actually using their heads here. Everyone’s just so pissed off and are dying to incite hate on the internet. Alright, I know this is actually hurtful for some people. Cap’s more than just some character on a page, he’s a symbol of hope and freedom, and the true American way. Admittedly, I was a bit upset myself after learning Doc Ock switched brains with Spider-man. I literally stopped reading comics altogether for a good two or three months. It was very upsetting, “how in the world could Marvel do such a thing to us?”But I eventually gave it a shot, and guess what? Everything turned out to be okay in the end.

So please people. Stop. Quite with the worrying. Stop the hate, and just let this whole thing ride out. Just wait a couple of months. Let’s find out what’s really going on, and let’s see what this ultimately means for our heroes.