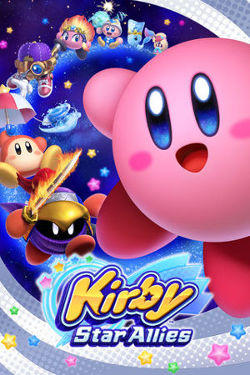 Kirby has always been Kirby, and Kirby games will always remain easy.
This isn’t always a bad thing; games don’t always need to be a Dark Soul level of hard to be enjoyable. This was my misconception when I decided to do a review on Kirby, it’s so easy.

And despite me growing up with the original games like Kirby’s Dreamland and its various parts, that can sometimes be a downside. The best part of Kirby would be its simplicity. I don’t need to over-think things, and the world is bright and colorful and inviting. Being able to play something just based on the feeling of joy it gives you instead of frustration driving you to finish brings a nice feeling while playing. The story is very loose and childish with no real words to follow and mainly pictures. But it seems to be about an alien race spreading black hearts across the universe to be able to awaken some kind of evil to conquer the universe. The dark hearts are settling into residents of the universe such as Dream Land and Pop Star Planet, though they were already baddies so I don’t understand how a black heart makes them worse. I guess they needed something to have them fight Kirby again. As Kirby you have your copy ability, but you also have the ability of magically sprouting hearts to throw at enemies. When certain enemies are hit with that heart they then become your allies, thus the name ‘Kirby Star Allies’.

The game is cute, lovable, and the soundtrack matches it with the same upbeat nature. It also manages to remix the music from the original Kirby games, and I would have to say these remixes are really good. This is a great game which does come with some extra modes so even after you finish the main storyline you are left with much to do and test after. Be warned that the meat of the game does come from its extra features so if you aren’t someone who is into time trials or boss runs, this is not for you.

All and all Kirby Star Allies is a great game and worth it to me. It very much proved me wrong, when I saw this game I thought I wouldn’t enjoy it and it was a waste of money, but now I am playing it to get the best scores and runs. Truly a win for Nintendo!