The “harem” anime is a staple of the media. A young man or woman surrounded by people of various extreme personality types, all who want the man characters to love. This type of story has existed and will always exist as far trends seem to indicate, but for many western viewers it is easy to track their first exposure to the genre.

Tenchi Muyo (which literally translates into “No Need For Tenchi! which we will come back to later) is a long running anime, manga, light novel, radio drama, and movie series; despite being released in 1992, there is no long period of time without a Tenchi Muyo! property being released.

Now giving a synopsis of the Tenchi Muyo! series is difficult. It has 4 anime series, 5 spin offs, and let’s not count every movie or side media that altered the series a bit. Tenchi Muyo! makes sense of it’s lore by having similar themes, occurrences and characters across all of them. The common plot is that teenager Tenchi Masaki lives with his father and grandfather at the Masaki shrine or sometimes in the middle of a lake.

…Or sometimes in a mountain recluse of a home a bit a way from the shrine.

…Or that one time he lived in the city by himself away from home but had a portal in his bed back to his father’s house.

Tenchi’s grandfather is the attending priest at the shrine or magic tree or sacred cave of your chosen setting. He holds a secret though as he is actually the prince to a multi planet alien kingdom, a fact not revealed until alien women begin raining from the sky, all for various plot reasons.

Those lovely ladies are:

Ayeka Masaki Jurai– Princess of the people of Jurai and Tenchi’s cousin. She loves Tenchi. 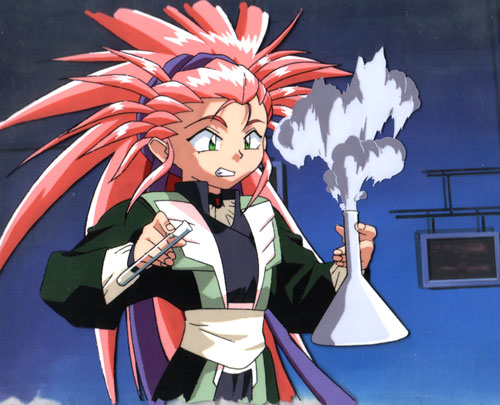 Washu Hakubi– mad scientist and part time goddess. She is Ryoko’s mother and is the most intelligent person in the universe. She wants Tenchi as a “Love experiment”.

Ryo-Ohki/ Fuko– Artificial in creation for a bit of the Tenchi Universes. It is agreed she is a creation of Washu and thus the sister of Ryoko. While normally having the form of a bunny mixed with a cat, she can turn into a ship and sometimes a bunny earred girl. She has a crush on Tenchi.

Mihoshi Kuramitsu– Space Police officer and a bit of a flighty headed girl, she has trouble focusing and in most series it’s up to her partner Kiyone to keep her on track. She is the great great grand daughter of Washu making her the niece of Ryoko. She has affection towards Tenchi that is sometimes romantic (it depends on the series).

Kiyone Makibi– Highly skilled space police officer and Mihoshi’s partner. She technically isn’t canon to the original source series, invented by first OVA’s director. She serves as the level headed member of the cast and isn’t in love with Tenchi.

The series would go on to introduce more women every season. But with each season sorta being their own contained uinverse including a faux daughter for Tenchi  (who loved him), super powerful high school students (they loved him), a tree-ghost (?) (Who as you can guess loved him).

This is why the title matters. You see Tenchi is honestly useless, why we have the title no need. He is meek and wake willed yet space gods fall in love with. Yes down the line of each plot he eventually grows to have the strength to defend those who love him, but they love him prior to that. I know media is mostly wish fulfillment but with Tenchi and most harem animes, the main character simply has to exist. They try to make excuses for it. About how he is kind or extremely caring but really it’s just to make it’s viewers feel a bit better.

Nothing wrong with that though. Escaping is what is important when it comes to certain facets of media but I think it is telling that the shows title translates to no need for the main character.

I do love the series and recommend finding the original for a dose of old school 90’s anime fun and check out the new series for updated plots and character models (as well as new girls of course).