I am an immense Codename: Kids Next Door fan. Every episode, every operative, every piece of 2×4 tech have been committed to memory. I cherish any moment I get to talk about the show and its universe.

Narrated by a Stan Lee-like announcer, this episode is presented in comic form as the Kids Next Door operatives of Sector V are attacked by Santa’s Elfa Strike Squad aka the X-Men. 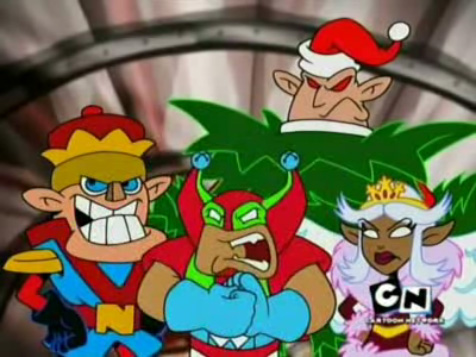 The made up of members are Wintergreen (Wolverine), Nutcracker (Night Crawler), Snow Angel (A mix of Storm and Angel), and Coniferous (Colossus); they serve as the attack team of Santa Clause. They attack the KND in order to retrieve the REINDEER system which is capable of picking out and giving coal to the naughty children while delivering gifts to the good children (like how Cerebro in the Marvel universe can predict the locations of awaking mutants.)

The Sector V KND eventually manage to clear their name and have to team up with Santa in order to stop the vile machinations of the Faculty Four (yes, the Fantastic Four make a appearance), the allies of the Arbor Day Avengers (do I even have to tell you who that is in reference of?)

Overall while every episode of Codename: KND is fun and Easter egg filled, this episode has a special place in the halls of creative use of series creator Mr. Warburton’s many fandoms.

So that was Operation: N.A.U.G.H.T.Y. If you are a Marvel fan, then check it out true believers!

0 comments on “Do You Remember? The Kids Next Door / X-Men Themed Holiday Special”