IndieCade is a game conference that allows indie game developers to showcase their projects to the general public. 2016 makes it the fourth year since it hit NYC, however this was my first time attending. I’d heard about it from a friend in previous years, but the fool always neglected to inform me about it until long after it had passed. Now having finally gone, I’m even more upset with the guy, considering how incredibly awesome it is.

You walk in, and there’s a whole bunch of arcade cabinets, loaded with fun and unique games. My favorite one had to be Particle Mace, which had you and three other players fly a ship that was carrying a mace, which you had to maneuver in such a way that the club hits your opponents ship. The mode we played required one player to get up to six kills in order to win. 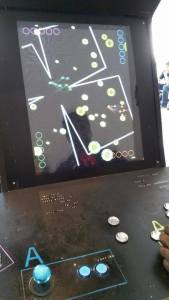 Sony even had a few sponsored games there, the most notable ones to me being Gang Bests, and Giant Robot Golf. Because who the heck doesn’t want to rampage throughout the city in giant robot, just to play a little game of golf? They even had the Playstation VR in another room. I didn’t get a chance to play around with it while I was there though. Lines were piling up, and I had to go to work afterwords, but what I saw looked interesting enough. The game they played looked like some kind of three dimensional tetris-like freefall mini-game? I don’t know how to really describe it, but basically players took control of this block, and had to turn it around in order to made the shape of this hole in an upcoming wall. Start off slow and simple enough, but of course the speed increases as you progress. I’m not too sure how well the device worked, compared to the Oculus, but it was pretty large.

Speaking of the Oculus though, I got to speak with one developer who had his own passion project on display. Vistics, a 2.5 platformer, by Scott Tongue, enhanced with magic of VR. I’d actually had a discussion not too long ago with a friend, inquiring how one can incorporate VR into a 2D style game. We were both kind of stumped as to how well it can be done, but lo and behold. Here comes this brilliant guy already making it happen. By using the rift, one can look around the games environment, helping to reveal hidden platforms and doorways. Pretty damn neat.

Another neat feature was Reopaf, another multiplayer, where you and three other players took control of witches whose spells were reminiscent of classic shoot em up bosses. So now instead of piloting a ship like a ninja, trying to get through a million lasers on-screen, you also have the ability to fire those same lasers.

In general, I had a great time visiting. Great venue, no ridiculous crowds, and tons of fun all around. I really hope to see a lot of these games fully funded and published someday. Definitely recommend a visit by anyone who loves video games. 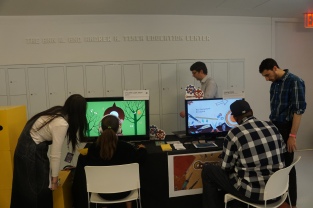 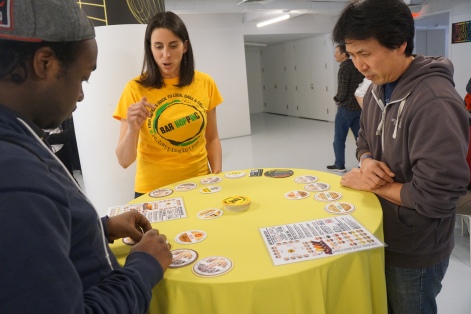 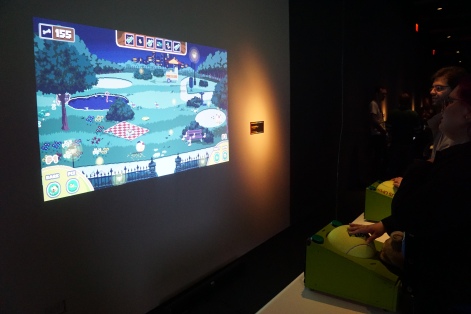