You shrug off the weariness from battle as you make your way through the parapets of a ruined castle town. You make your way down a ladder after quickly dispatching some unwary enemies, finding reprieve in the room below. Taking a quick second, you heal and check your inventory to make sure everything is in place before proceeding. Gingerly picking your way outside, you notice two hollows; one with a shield and spear looking in your direction, the other with a crossbow walking away. You wait a second to let the crossbowman wander away so you wouldn’t be at a disadvantage of fighting two versus one, once he’s a sufficient distance away you charge. That’s when the dragon landed. 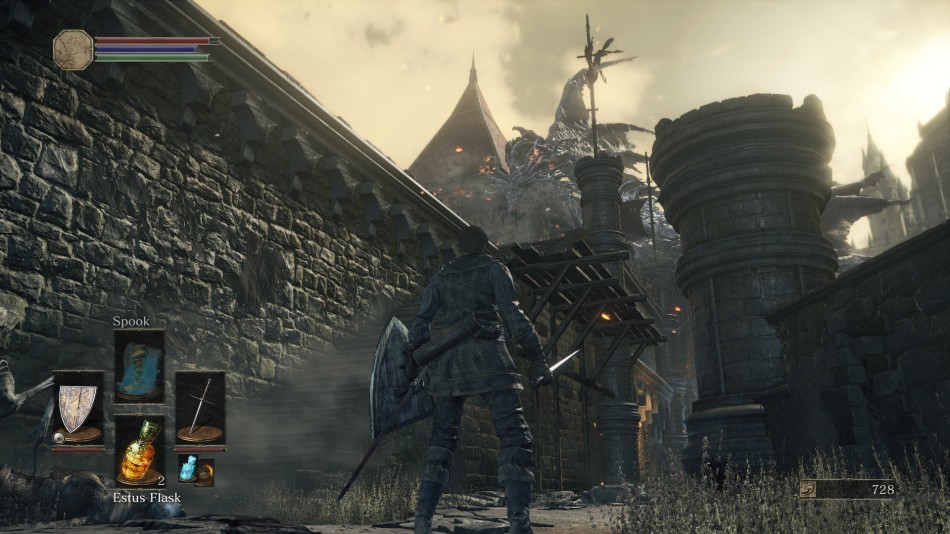 Dark Souls 3 is the long anticipated game developed by FromSoftware, since mid-2013 fans have waited for this return into bonfires, demons and undead with bated breath. A few aspects of the game that were in Dark Souls 2 have been reworked back to the original Demon Souls/Dark Souls formula. With the addition of a magic meter comes the use of “Ash Estus Flasks” which helps to restore your secondary resource. Of course there is still stamina to be consumed and managed but I find I favor the magic system over the old one which involved a finite usage of spells. The weapons and skill sets each have been more or less reworked from their Dark Souls 2 days, various “Weapon Arts.” provide a fresh flurry of powerful moves that help during battle. Be it a giant sweep of a great sword, a flurry of attacks from the whip or even buffing one’s self to dish out more damage overall, there’s something to each weapon type that keep options open in both the PVP and PVE environment. Dodging and blocking are your only defensive measures in the game, that and chugging your flask as your getting hit but still it’s better then dying right? 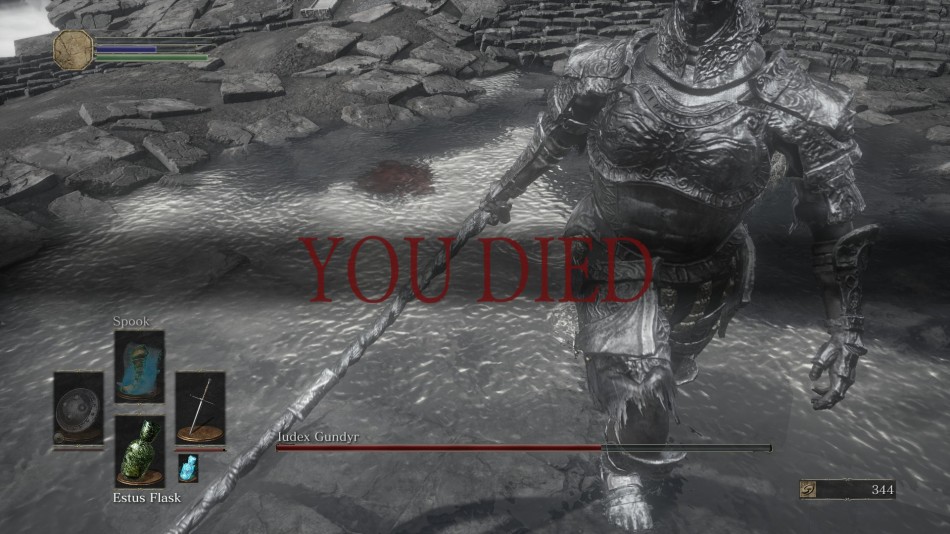 Dying in the game isn’t actually all that rough anymore. Instead of being reverted back to a hollowed state gradually, you loose a flat percentage of HP which can be restored using an item to restore your ember. Otherwise you’ll have to just go through the long trek of killing enemies all over again as you try to get back to your dropped souls, the currency of the game. 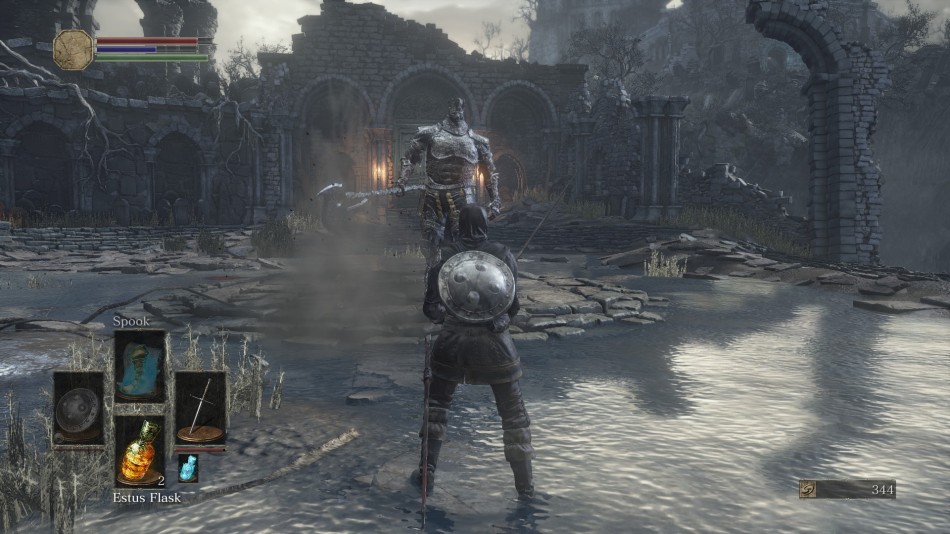 Visually, the game is stunning. Receiving a  graphical overhaul, the scenery is eye catching and detailed unlike it’s predecessors blocky, textured backdrops. NPCs, both hostile and friendly have also gotten a nice pick up. The enemies are disgustingly grotesque which fit the cursed lands very nicely. Friendlier NPCs are varied with a wide range of looks, the main hub which you’ll go back to, to do your shopping and upgrading is rather empty at first, but with a little exploration it will fill up nicely with more NPCs that provide different services like selling you magical spells or turning boss souls into weapons. The music is also a big part of the game and frankly, they are some of the best pieces I’ve heard to date. The composer is able to creat 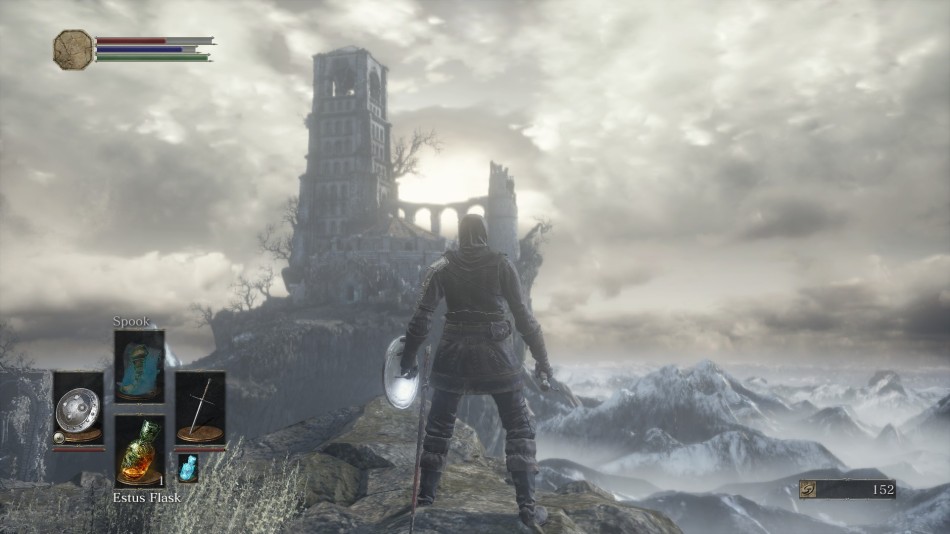 Bonfires make a return as your form of transportation as you teleport around the kingdom of Lothric as you try and avert the an oncoming apocalypse, you know how most Souls games go. The boss encounters have gone up in scale and magnitude, giant tree like monstrosities, to dragons, to… Giant… Knight.. Dog…Things What ever this is… 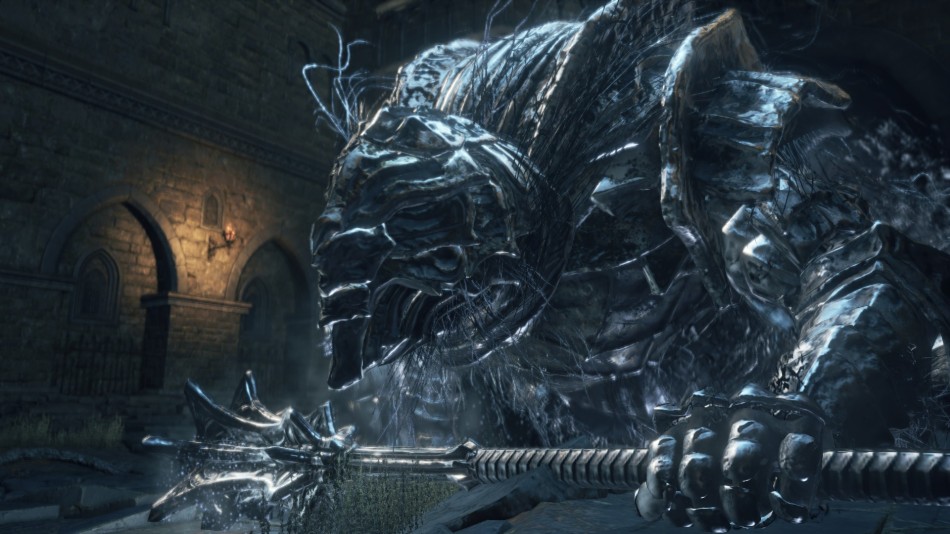 Players can leave behind their “sign” using a soap stone to help others progress through the levels. This is a good way for the helper to get a lay of the land without risking too much, as all that happens upon their death is they get booted back to their world. Co-op player succeed when the host is able to defeat the area boss at which point the clients will receive a reward and return to their own world, the host dying means a failure and the client is returned. Of course players have the ability to invade other players for some good old player versus player action,first timers be warned! There are a few things to note when engaging with other players. For one, online play is platform specific so there is no cross-platform play. A host player must have the power of the “Lord of Cinder”, the powered up state when a player uses an “Ember” (it’s the equivalent of Humanity in this game).  Up to six players can be in the same session at once,  match making will be level-based: taking into account the player’s current soul level and level of the weapon equipped. So you won’t face someone who outclasses you outright, this though can be forgone with the password system in place. 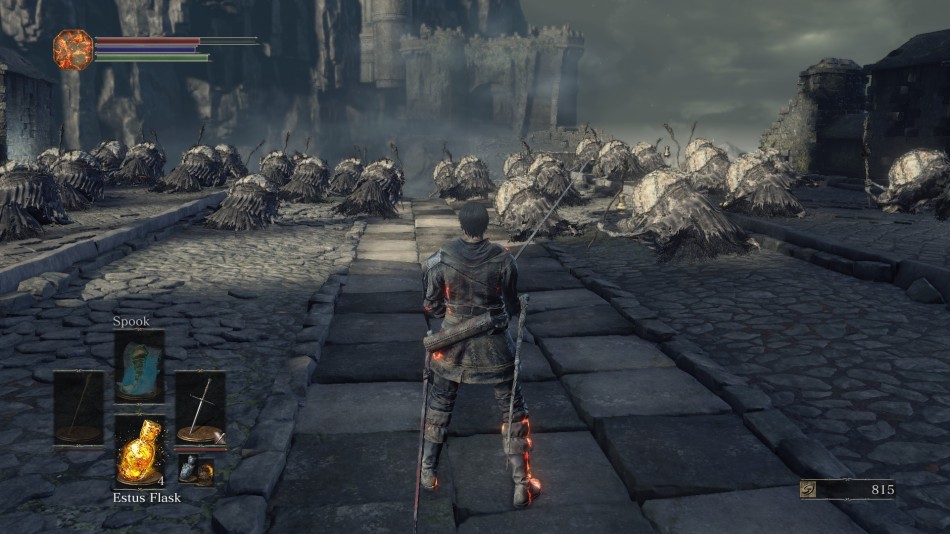 Personally I have barely scratched the surface.